Before you start calling me crazy, stupid, weird, xenophobe, anti-national, bhakt, and all the other nasty words every intellectual throws around these days, let me tell you that this is an elaborate plan.

Take a deep breath and assume for one second that Donald Trump comes to power
(Melodramatic NAHIIIIIIIII).

For the next 4 years, we have a systematic suppression of Indians, Muslims, and Indian-Muslims in the United States.

Not to forget the Mexicans, the Chinese, and all the other races, apart from the British of course, who had the singular misfortune of establishing colonies in USA in the 17th century.

The next 4 years go terribly badly. Imagine that scene from a dystopian film where you have tyres burning, roads deserted, vultures flying.

It is difficult to envision a #Trump2020 campaign happening. Assuming he isn’t assassinated during his swearing in, here’s why:

The majority of the skilled workforce of America are non-native Americans. Donald Trump’s idea for reform in education is not too concrete either. It is easy foresee a future in which USA faces a shortage of skilled workforce. That directly translates to in-house American industries taking a fall. In such a scenario, Trump can do either of the two things. Woo skilled workforce from other countries, and thus weaken his support among xenophobes. Or keep digging his grave further by sticking to his policy.

Trump proudly claims to not succumb to pressures from corporates. He hasn’t taken donations and has sometimes gone against large companies too. He has recently asked followers to boycott Apple over the FBI issue. Just when discriminating against Mexicans and browns became too mainstream, why spare the Apple fanboys? Though, in his defense, the Apple fanboys are a lot more annoying than the rest.

With his racist (or as Neo-Nazis like to call them, straight-from-the-heart) comments, he will probably end up alienating most of his existing supporters, not to mention lots of other communities that he won’t forget to discriminate against, in his 4 years of Presidency. Again, weakening his vote bank.

His chances of getting re-elected look very bleak.

He is like that one train trip on the general compartment we all take, just for the thrills, and ultimately realize that it isn’t really worth it.

What happens after 4 years?

Basically what happened to (West) Germany after 1945.

Remember how nicely Germany treated Jews post the age of Hitler? It is reasonable to assume that the next Presidential candidates will learn from the mistakes of Donald Trump and try to negate them. We can expect the next President of USA to be a Justin Trudeau of sorts. (Justin is the cute Canadian dude who is sort of running his country really well when he’s not busy welcoming refugees or hanging out with baby pandas!).

We can expect a lot of reforms to take place. The next President will definitely pander to the needs and aspirations of the non-white folks of America. We will experience less racial hatred from the whites now that they know how much they need us. Even if they still hate us, that will help slow down the juggernaut of brain-drain from our country. Win-win! But hopefully, a wave of political correctness will sweep USA, as is happening in our country right now. It will be easier for you to migrate, work, and settle there.

Though it probably won’t matter to the Punjabis for whom Canadda will remain the first choice.

Intellectual: A person with a view on JNU

Xenophobia: A Marathi’s feeling towards Biharis

In the States, every time a mass shooting occurs, Trump calls it a “mental problem” and does not do anything about it. Which is good in a way for us Indians. With so many Americans getting killed in mass shootings, newer jobs are being created. And who better (and cheaper) than Asians to take them over?

And we are so many in number, that a few deaths here and there do not really matter to us. Just ask the folks in Delhi, where just pollution kills 8 people per day. And then if you consider reckless driving, racism, rape, and probably even the onset of exams, people in our country are getting used to dying.

But coming back to the States, Donald Trump has normalized absurdity. The major and most sticking allegations against Obama was that he was not doing enough about the situation in the middle east. And then comes his successor Trump, who is creating  new situations everywhere he’s going.

Credit where it’s due: Trump has established some great (and under-the-table) friendship with Russia. I mean, Russia are nice folks after all, right? Other than the suppression of dissent, cyber warfare, actual warfare…

And finally, I am losing faith in the internet. I tried to compare Obama and Trump by checking negative sentiments against them, and here’s what I got:

If you are convinced why Trump is our man, please click here to get an email from me every month.

If you’re not convinced, click here. And then here. 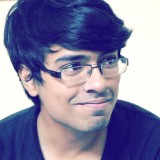 I am a student of Computer Science and Engineering at Vellore Institute of Technology. I like finding out about as many things in the world as possible!

One reply on “Why I Want Donald Trump to Win”

[…] I agree that I went offbeat on this topic, but I’ll be back with another mainstream topic later. Probably on Trump. […]